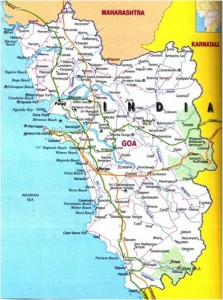 After 450 years of Portuguese rule, Goa was liberated on 19th December 1961, and along with Daman and Diu, Goa became the Indian union territory.On 30th May 1987, Goa was declared as India’s twenty-fifth state.

Goa is the smallest state situated in Konkan west region of India. It is bounded by two neighboring states of Maharashtra in the North and Karnataka in East and South, while the Arabian Sea forms its western coast. Goa lies between the latitudes 14°53′54″ N and 15°40′00″ N and longitudes 73°40′33″ E and 74°20′13″ E, which encompasses an area of 3,702 km2 (1,429 sq mi) and coastline of 101 km (63 mi).  Throughout the year Goa’s climate remains hot and humid. It has the shortest winter and monsoon starts from June. Goa has seven major rivers Mandovi, Zuari, Terekhol, Chapora, Kushavati, Betul, Talpon and the Sal.The Mormugao harbor situated on the mouth of the River Zuari is the best natural harbors in South Asia. Most of the cities of Goa are situated on the banks of rivers and are connected with ferry boats and bridges. Goa has one International Airport at Dabolim near Vasco-da-Gama in Marmugao Taluka.

Goa has two districts: North Goa and South Goa. Each district is governed by a District Collector and an Administrator.

The forest cover of Goa is about 1424 sq.kms.(549.81 sq.miles). Part of one of the Biodiversity Hotspots of the world namely the Western Ghats lies in Goa.

Rice is the main crop of Goa. Along with Rice, Ragi and pulses are also grown in Goa.

Advertisement of Walk-in-Interview for appointment of Interns at GSBB.' on our website.

Quotations invited for various services by Goa State Biodiversity Board

Link to vote for GoVan project and Shram Shakti Se Jal Samruddhi https://exhibition.skoch.in/beacons-of-hope-results/ For “Instructions to vote for GoVan project and Shram Shakti Se Jal Samruddhi Please follow the below mentioned steps for submission of vote: Step 1: Go to SKOCH Exhibition (https://exhibition.skoch.in) and click on 'Beacons of Hope' in the Menu bar. Step 2: Look for your Project and Organisation name in the list. If you can't find your project link on the first page, go to the next page(s). Step 3: Go through the page of your project and follow the instructions properly. Step 4: At the bottom of the page, you will find the voting button. Click that to go to the voting form Step 5: Put all necessary information there and cast your vote. In order to improve your chances to win SKOCH Order-of-Merit, you may like to share the link with your stakeholders. You are also urged to host the above link on your website and encourage people in your ecosystem to visit, learn, understand, support and Vote for you. The voting lines are now open and it will close at 18:00 hrs on Saturday, 15th October 2022 . For Assistance Please Contact Deepak Dalal Managing Director SKOCH Group 9911146912